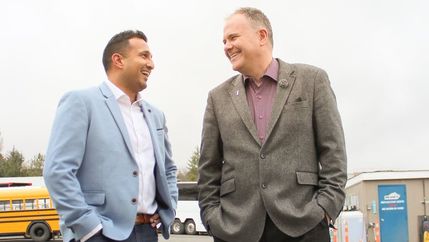 Rahim Khudabux and John Wilson
It takes long hours to grow a company and establish a brand, but true success is measured by how committed we are to building a life we value. Strong support for family, and real friends dedicated to the same path at work and at home.

For John Wilson, President and Owner of Wilson’s Transportation Group, and Rahim Khudabux, GM and Owner of Max Furniture, meeting at The Chamber has blossomed into an invaluable friendship.

“We have the same values,” Wilson says, adding that his family and Khudabux’s often hang out, going to Royals hockey games or taking trips to Seattle to watch big league sports. “They’re as close to family as you can get.”

Khudabux, owner of Max Furniture, says he decided to become a member of The Chamber’s Board of Directors because of Wilson.

“I call John all the time to ask questions,” Khudabux says, embracing the opportunity to learn from one of Greater Victoria’s top business owners.

Wilson, Vice-Chair of The Chamber Board of Directors, is also co-owner of the Victoria HarbourCats baseball team. His companies often purchase from Max Furniture, after getting to know the products from Chamber mixers held at the store. And when Wilson was looking for help promoting the HarbourCats, the gregarious Khudabux quickly agreed to become “Rahim the Dream,” providing entertainment to fans between innings.

“He’s a big personality,” Wilson says of Khudabux. ”He’s fun loving, everybody likes him and he’s not shy to put on a show in front of a lot of people.”

“For me, it’s getting my face out there,” Khudabux says, adding the gig has helped his store be top of mind for fans in need of furniture. “It makes you a real person.”
Speak to your Member Services Rep: members@victoriachamber.ca
Back to Top ^